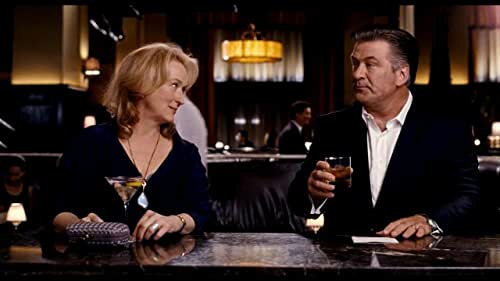 It’s Complicated is an adult comedy about a complex couple that’s actually amusing to watch. The film, written and directed by Nancy Meyers (The Holiday, Something’s Gotta Give), is a pleasant picture that’s both funny and genuinely touching.

Unfortunately, Jane has the misfortune of coming face to face with infidelity when she is cheated on by her ex-husband lawyer Jake (Alec Baldwin). The couple’s divorce, after 20 years of marriage, has devastated the family, especially the children. Stream it at 123 Movie.

For comfort, Jane resorts to nights with wine and close friends.

At this point in her life, she is, for the first time in a long time, on her own. She is husbandless and her children have all moved out of her home. In Jane’s mind, it’s the perfect time to re-model her house and to do what makes her happy. She calls upon a talented architect named Adam (Steve Martin) to get the job done.

But things aren’t quite set in stone.

When Jake’s new marriage with his younger wife doesn’t turn out to be what he hoped for, he begins to long for Jane to be a part of his life again. It isn’t long before Jane is seduced by Jake and they engage in an affair. Adam, however, begins to take interest in Jane, and vice versa. Sooner than later, all three become involved in a convoluted love triangle.

It’s Complicated allows for a fun time at the movies. Nancy Meyers’ smart story focuses on a conflict that every couple is bound to face at some point: the conflict between logic and emotion, which makes the film all the more relatable and real. Meyers admirably avoids the typical, cliché romantic comedy dialogue and at the same time, keeps us invested in her characters.

Meryl Streep and Alec Baldwin make for a top-notch team. Streep is effervescent, Baldwin is a riot as the charming, smooth-talking Jake, and Steve Martin is perfectly fitting as the quixotic, warm-hearted Adam. The Office’s John Krasinski is hysterical as Harley, whose every one-liner is bound to evoke laughter.

It’s Complicated is fresh and easy to enjoy. Even though it can be a bit on the feminine side at times, both Baldwin’s demeanor and Krasinski’s natural likability make this movie a treat that’s worth seeing, even if only once.