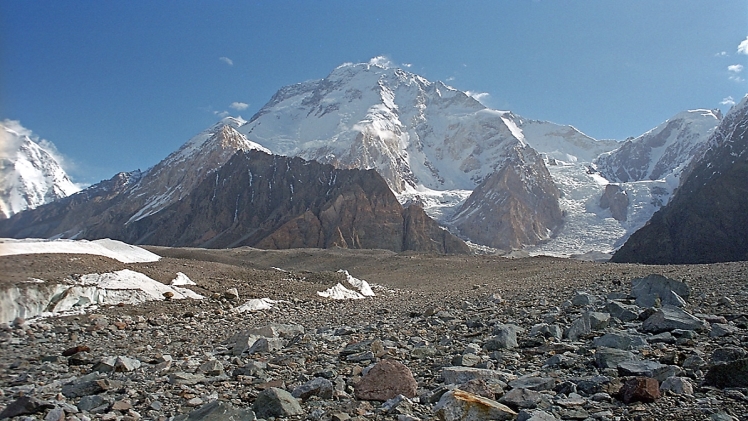 Broad Peak (also known as K3) is a 12,047 ft.
/ 3,672 m. mountain in the Karakoram Mountain range of the Gilgit-Baltistan region of Pakistan. It is the 12th highest mountain in the world, and it is located on the border of Pakistan and China, about 8 km from K2, but it is separated from K2 by a glacier.
The name “Broad Peak” comes from the fact that peak has a broad summit plateau about 1 km long.

The Broad Peak expedition was a mountaineering expedition to Broad Peak in the Himalayas, led by Fritz Wintersteller of Austria. It made the first ascent of Broad Peak, on June 9, 1957.

Wintersteller was joined on the expedition by Marcus Schmuck and Kurt Diemberger from Austria; Hermann Buhl from Germany; and Sher Khan from Pakistan.

Reaching base camp on April 29, 1957, they established Camp I at 5,700 meters (18,700 ft) on May 17 and Camp II at 6,300 meters (20,670 ft) on May 21. On May 27 they reached 7,250 meters (23,790 ft) when the weather turned bad and they were forced to retreat to base camp. They then established Camp III at 7,100 meters (23,300 ft), which they reached on June 1. On June 7 they retreated to Camp II following avalanches at their high camp. On June 9 after waiting for a break in the weather they climbed through waist-deep snow to make another attempt on the summit. It was not until 3:00 pm that they finally made it to the top. Broad Peak and Manaslu and Ama Dablam are considered as same difficulty whereas Lobuche Peak and Island Peak are easy climbing peaks.

The prominence of Broad Peak (the elevation difference between its summit and that of its surrounding terrain) is only around 250 meters (820 ft). However, it is considered one of the easiest 8000-meter peaks to climb because it has a very gentle slope on one side.